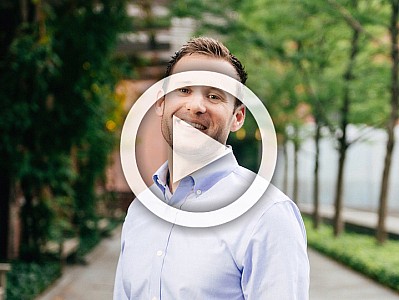 When Josh Brackett came to Wharton’s EMBA program in Philadelphia, he brought many experiences to the table. Those included nonprofit work in Africa, deployments in Iraq and Afghanistan with the U.S. Army, risk management jobs in the private sector, and a strategy role at CBS. We asked Josh to tell us more about what brought him to Wharton, and what it’s like to be a student in the EMBA program. Here is what he said:

After I graduated from college in 2002, I went to Africa for a few years to work on nonprofit projects. When the war in Iraq began, my best friend and I decided to join the Army together. We chose to enlist and became Army Rangers. So we spent four years in the military, with five deployments to Iraq and Afghanistan. Those were probably the best four years of my life. At the end, it was 2008 and I chose to work in risk management. In 2012, I transitioned to corporate America and into business. Now, I’m vice president of strategy and program director of Veterans Initiatives for CBS Corp. in New York City.

On Applicable Skills from the Army:

During the time I was in the Army, I learned a lot about leadership. I learned the importance of rolling up your sleeves and getting your hands dirty in the details. It’s not that different in corporate America when you’re dealing with large financial statements and complex transactional issues. Excellence is in the details. Both require discipline and rigor to analyze difficult problems from a strategic and tactical point of view. Those skill sets from the military are serving me well in the private sector as well as here at Wharton.

One of the great things about working for a large media and entertainment company is the brand and my ability to leverage my passions. I’m part of the team that runs the veterans’ program at CBS. There’s a lot of good will and support for that program. What we do is help veterans transition from the military through internships, public service announcements and partnering with nonprofits to make a real impact in that space.

On Coming to Wharton:

Down the road, I want to be able to look back and say that I went through the same curriculum that I would have in a full-time MBA program. This was important because there was no way I was willing to give up my job to go back to school. But in Wharton’s EMBA program, I could have both. I can get the MBA with the same rigorous curriculum and same faculty as the full-time MBA program – and I can still do what I love at work.

I had not had any formal finance training and was looking to correct that. When I thought about it that way, I had a clear picture about why I wanted an MBA and Wharton made the most sense. It’s rigorous. It’s quantitative. It’s flexible. It has a dynamic and diverse faculty. It’s a program that says, “This is the threshold. This is where you need to be. What do you want to do from here?”

Looking back at my experiences, everything worth doing, whether in Africa or in the military, was challenging. Looking ahead, making an impact on people’s lives will be challenging. It’s also challenging to take a long hard look at the skills you want to develop and the training you already have to determine where you want to go and how to get there. The Wharton MBA is without doubt an integral and important part of that.

Being on campus, you’re reminded why you are here – to focus on the curriculum. It’s about working on projects together. It’s about going out with your classmates. It’s a chance to separate yourself from the chaos of everyday life and focus on the purpose of being in school: to get a phenomenal education.