Why Wharton’s EMBA Program is Worth Commuting to from Asia

“At the end of the day, it doesn’t matter whether you fly six or 16 hours. You will grow with every challenge and figure out how to make it work, so make sure to pursue the best education possible and don’t limit yourself because of geography.”

With one of the longer commutes to Wharton, EMBA student Donatas Grabliauskas WG’19 traveled from Singapore to San Francisco in his first year and is now commuting to campus from Tokyo, Japan. Despite the long miles and airfare, he says it’s all worth it to earn a Wharton MBA.

“I wanted to make sure that I would learn as much as possible in a rigorous program. I didn’t want a watered-down MBA. Wharton’s MBA Program for Executives offers the full MBA in an executive format,” he explains, adding that he also wanted access to both coasts in the U.S. “Wharton’s EMBA Program is very unique because you can get exposure to the innovation and technology worlds of Silicon Valley as well as the finance and consulting worlds on the East Coast.”

In addition, Donatas, who works for Johnson & Johnson as marketing director, appreciates Wharton’s connections to healthcare.

When Donatas began Wharton’s EMBA program, he was commuting from Singapore, which meant a 15 to 17-hour flight each way. While his commuting time from Tokyo to San Francisco is shorter and more direct, it is still a 10-hour flight in each direction.

“The most challenging aspect of the commute is dealing with jet lag, but I’ve adapted by living in between the time zones. In Asia, I try to get up very early and go to bed earlier, so that when I’m in San Francisco there is less of a difference,” he says.

The other challenge is the financial side, as Donatas is self-sponsored. He explains, “I look at this as an investment in my education, which always has the biggest return on investment. I believe that it is important to have a learning mindset to grow and progress.”

He adds that the commute is also worth it for several other reasons:

“I was surprised by the accessibility of the faculty. I’ve reached out to quite a few professors outside of class to discuss ideas and challenges I had at work. Not only were they willing to engage with me, I’ve been able to implement their feedback and research insights, directly benefiting my work. It’s like having top experts as your sounding and consulting board.

“I’m impressed with my classmates’ diverse experiences and expertise on both coasts. Whatever question I have — whether it’s in finance, law, healthcare or technology — I have classmates who are experts in those areas. It is a powerful resource.”

“Business leaders often come to campus to give talks and engage with students. I would never have that level of access to top leaders, especially outside my own industry, in my day-to-day job.”

“It’s been very valuable to deepen my quantitative and analytical skills as well as have access to the latest research on topics such as leadership. My classes are helping me to become a better leader and employee because my knowledge and skills are growing.”

When Donatas talks to prospective students about his commute, he tells them, “At the end of the day, it doesn’t matter whether you fly six or 16 hours. You will grow with every challenge and figure out how to make it work, so make sure to pursue the best education possible and don’t limit yourself because of geography.” 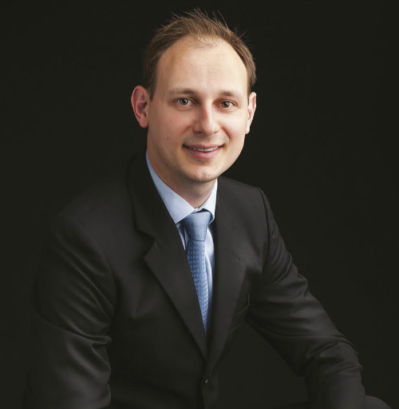