Wharton Stories » How This EMBA Alumna Is Sparking Innovation in the U.S. Air Force

How This EMBA Alumna Is Sparking Innovation in the U.S. Air Force

U.S. Air Force Director of Cyberspace Innovation Lauren Knausenberger, WG’12, made the transition from government contractor to entrepreneur to one of the youngest senior executives at the Pentagon.

As civilian director of cyberspace innovation for the U.S. Air Force, Lauren Knausenberger, WG’12, works on a diverse portfolio of initiatives that already have begun to ignite positive change in the Department of Defense.

Take, for example, the Spark Tank program — a concept similar to Shark Tank with six finalists in uniform pitching their ideas to a panel of Air Force senior leaders and industry partners to compete for funding.

“We invited people to put together three-minute pitches for a solution to a problem they care about in the Air Force. The ideas we received were powerful,” said Lauren, who is the director of Spark Tank. “It’s been a huge success so far — the first round of projects have been funded and are gaining traction.”

The competition is just one of many ways that Lauren is helping to drive innovation across the Department of Defense, speed the adoption of emerging technologies, and create stronger partnerships between the DoD, start-ups, and the venture community.

Since she took on the role in 2017, Lauren has earned a spot on the 2018 list of top Women in Tech as well as the prestigious Doolittle Award for inspiring Air Force innovation.

Lauren is also looking at major roadblocks to the adoption of technology, like the DoD cybersecurity accreditation process. “Cyberspace capabilities and threats are changing at an ever-increasing pace. If we wait a year to test a new capability in the old way, it’s already obsolete by the time we use it, and we have often asked the wrong questions,” she said.

“One of the most ironic examples is when we are using Agile methodologies to produce new capability for the warfighter on a daily or weekly basis, but can’t deliver to the user for months due to accreditation. This is not sustainable.”

Lauren recently signed a policy memo that allows top-performing Agile development teams who use an automated pipeline and approved processes to have continuous authority to deliver their products immediately to their users.

“Silicon Valley has done it this way for years, but this is game-changing in the DoD,” she said. “In the government, if we don’t fully understand the risk of adopting something new, we don’t take the risk. Instead, we continue to take known risks with vulnerable, old systems that we know might break — the devil we know is OK.”

Wharton’s focus on data-driven decision-making prepared Lauren to shake up the old process with a new perspective. “I’m using data analysis to better understand, communicate, and visualize the real risks involved to help everyone make better decisions. I’m showing people it’s OK to turn things on their head and look at them a different way.”

It was this kind of thinking that landed Lauren a role as one of the youngest senior executives in the Pentagon.

From Defense Contractor to Government Leader

Lauren worked for a defense contractor when she first came to Wharton’s MBA Program for Executives in 2010. Two years after graduating, she decided to fuse her government and defense experience with her passion for innovation and technology to launch her own company. (See sidebar to read about her journey.)

Founded in 2014, Accellint focused on solving national security challenges and invested in commercial technologies that could provide value to the government mission. The company grew quickly, and Lauren enjoyed the work and the flexibility. “Just as I felt things were fully in balance and I knew exactly what I wanted to do, life threw me an interesting curveball,” she said.

Lauren had been working with the U.S. Air Force to help develop an innovation framework to speed adoption of emerging technologies and perpetuate a culture of innovation. The plan was to hire a retired military officer to establish a new office focused on cyberspace innovation and for Lauren to provide advice and outside perspective as a civilian expert.

However, that plan changed when she received an unexpected call.

“The CIO told me he had been inspired by my passion for the problem set and my fresh perspective on where we could go, and that they wanted to pivot to a new leader and new way of thinking,” Lauren said. He asked if she would consider a senior appointee role in government. Although Lauren was hesitant to change course from her entrepreneurial path, the position was too good to pass up.

“At the end of day, I remain deeply motivated by mission, and was being given the opportunity and backing to fix problems that have driven me nuts for over 10 years,” she said. “It was an honor to be asked to take on these challenges, and I have a much higher probability of success being able to drive change directly as a senior executive than as a consultant.”

“It is so fulfilling to be able to serve this mission and do my best to make a big difference for our country in driving innovation, saving tax dollars, and encouraging Airmen to reach their potential,” she said. 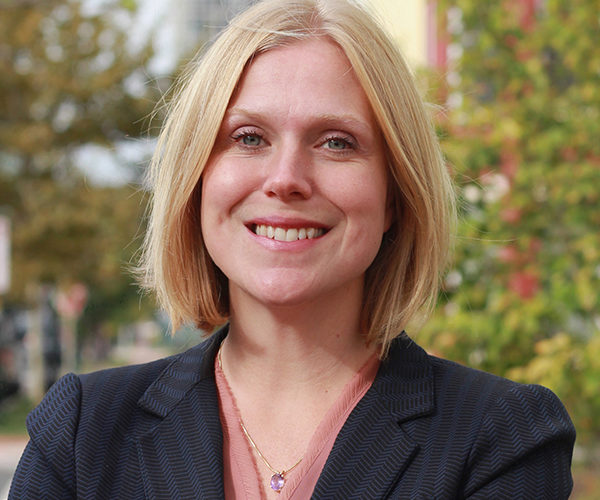 Prior Education
University of Maryland, B.S. in decision and information sciences

Working for a defense contractor, Lauren came to Wharton’s MBA Program for Executives to expand her network and explore new areas. “I was intrigued by entrepreneurship and innovation at a high level, but I didn’t know where to start. In many ways, I had been living in a D.C. federal government bubble,” she said.

She explored several possible paths at Wharton, including starting her own company. After graduation, Lauren started a family, earned a promotion, and had great success driving aggressive growth at her firm, but the long hours meant less time with her two young daughters. That’s when she decided to launch Accellint and create a position that infused her passion with her strengths — and gave her the flexibility to spend time with her family, too.

“I grew a lot during my time at WEMBA and graduated truly feeling that I was capable of anything, and that I had the tools to back it up. It’s also quite impressive how much immediate credibility one gets from the Wharton brand. Most importantly, I gained a new appreciation for judicious risk and fully embraced the mantra that if you have not failed lately, you have not been thinking big enough.”

“In addition to core business classes, I had taken electives in areas like the legal aspects of entrepreneurship, venture capital, valuation, and optimization theory. I felt so much more comfortable walking into that environment with knowledge and practical experience with business plans, navigating legal pitfalls, valuing companies, negotiating term sheets, and other critical ingredients. The commercial real estate class was awesome as well, and I was able to use the course material and professor’s mentorship to make my first commercial and residential real estate investments.”

“Many of my classmates owned businesses or worked in venture capital, and I spent many Friday night dinners discussing how they made their investments, where they had been burned, and where they had great success. It was fascinating. I also invested in several of my classmates’ ideas and my passion for angel investing was born. I felt confident that I could launch my business with the support of the Wharton network.”

“I came to Wharton to expand my horizon. Who knew when I entered the program that I would start a business, become an accomplished investor, and go full circle to make a difference in government – while getting to spend time with the people I care about most? That’s probably the most important thing that I learned: that the future has many possibilities and that there are fewer limits than I ever thought.”